During long runs, the synergistic interaction between a novel XLPE compound and a new screw design was revealed. We determined that the resulting run time could be increased by 300% or up to 3 weeks (140 ton of insulation XLPE) and the degassing time reduced to less than half. The last cable drum produced serves to prove the product quality during high stress electrical testing.

Developments towards a new screw

The extrusion screw and screw tip were optimized based on the observations made during initial runs. Computational fluid dynamics and change color tests were utilized in its development. These techniques gave a first indication of potential stagnation points in the insulation. Screw design was then adjusted by studying the extracted screw with its moulding after each production campaign.

The screw design was optimized by eliminating areas that could generate amber or scorch. The enhanced output from the new design experienced less residence time and a lower heat load on the compound. Figure 1 shows the successful molding quality after a long run.

No scorch and more heat

Running cooler to control HV and EHV cable extrusion (e.g. 130°C) drastically reduces the CV line speed. The effect is longer residence time, which increases the likelihood of scorch and limits overall run time. Recent findings confirm that the residence time of XLPE insulation in the extruder is significantly more important than the melt temperature in relation to scorch formation. It is screw scorch that limits extrusion run time the most. Increasing insulation extruder output by maintaining a higher melt temperature reduces the residence time and helps limit scorch.

The final cable drum of the 140 ton production campaign underwent a full type test to prove that the long run had not negatively affected the quality of the extruded cable. The 1200 mm2 110 kV cable was tested according to IEC62067, as a 220kV cable (Emax 9 kV/mm). The Tan δ was tested at 2U0. The test successfully passed. 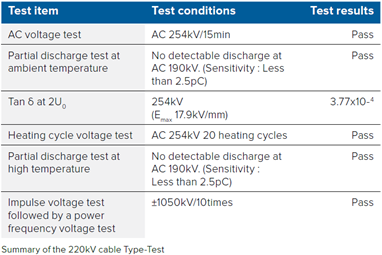 Since the early times of extruded high voltage subsea XLPE insulated cables, it has been mandatory to develop reliable in-house solutions for ...

Maillefer has recently acquired a Cable Checker unit for our new R&D lab. The unit is essentially a microscope connected to a hot oil bath for ...